As our nature demands, humans have always been curious creatures which love to explore and discover the world around us. This sense of adventure stays with us even if we decide to escape to an island paradise. And what could be better than exploring an underwater world while in a remote corner of the Seychelles? 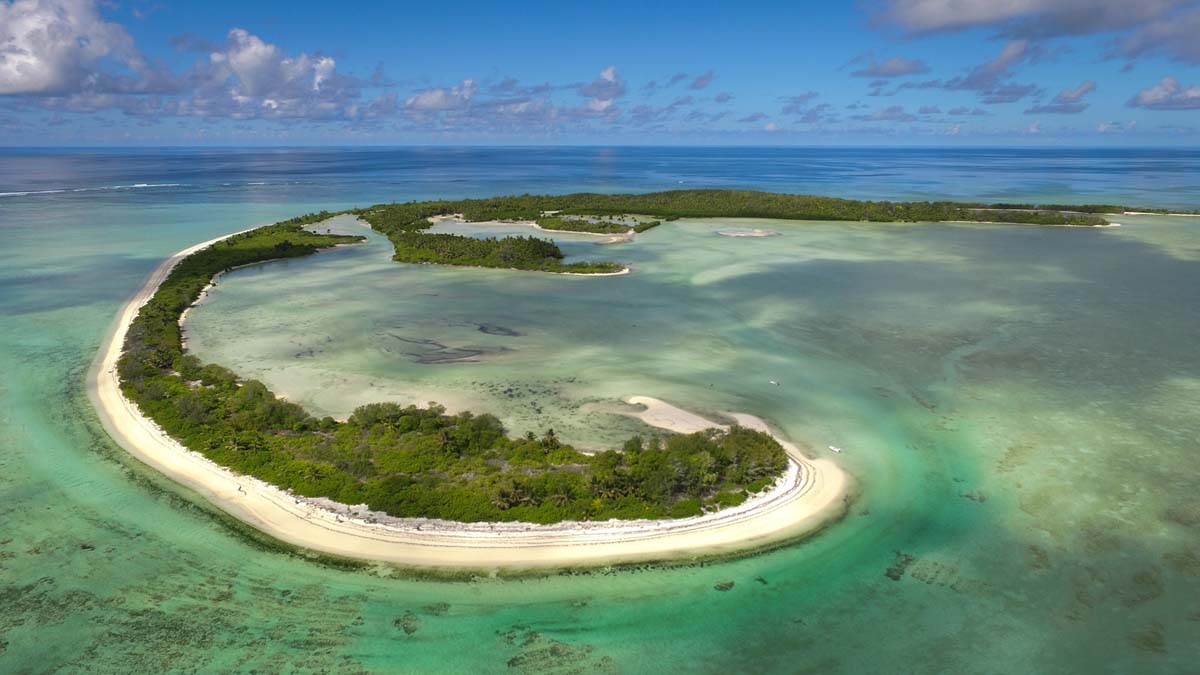 A scuba diving holiday at Alphonse Island in the Seychelles gives guests access to 30 sublime scuba diving sites scattered amongst the remote islands surrounding it. This includes the beautiful St. François Island and its glorious flats which are home to some of the most incredible pelagic species. These stunning creatures can be viewed by walking the sandy stretches or diving into the deep blue surrounds of the Atoll. 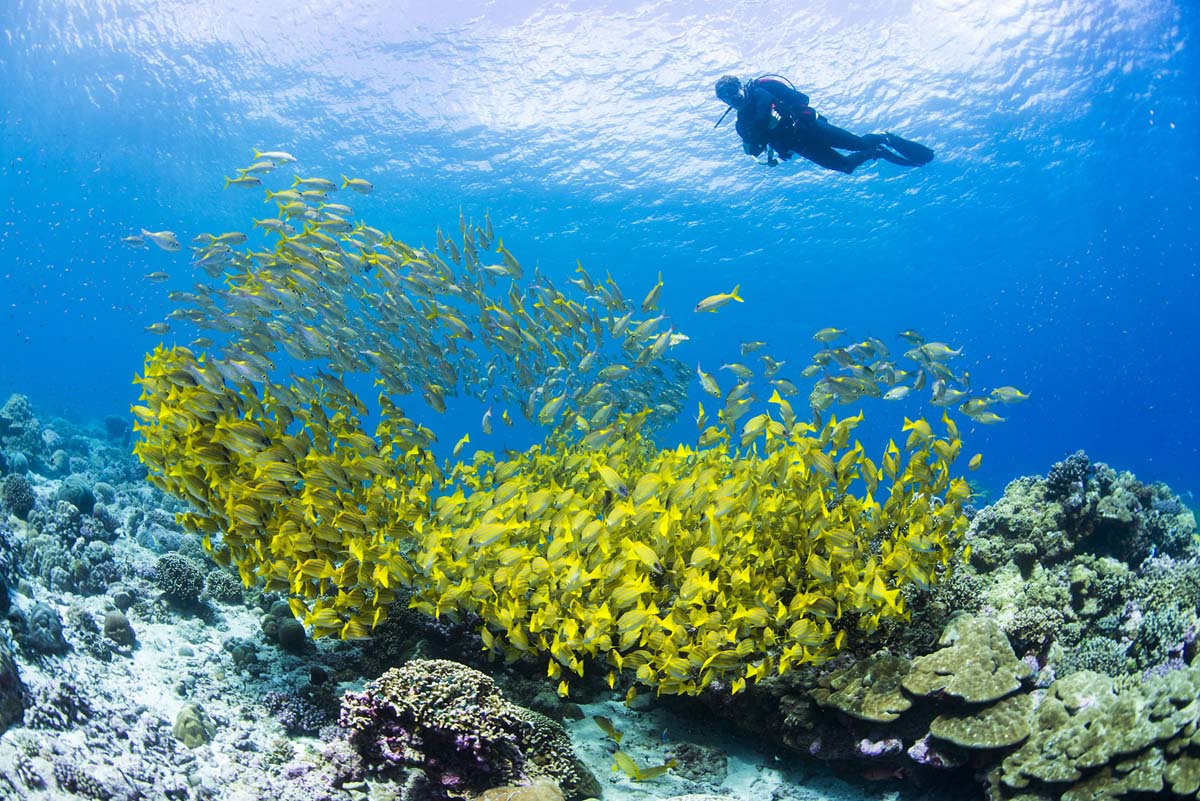 Reaching these remote sites means jumping onboard one of our dedicated diving vessels, the Amirante Cat or Zanbren. Purpose-built with 225hp, these vessels will get you to the dive sites in no time and they are equipped with all your diving gear as well as towels, snacks and drinks. So sit back and let our dedicated dive team take care of you as you explore the wonder-ful dive sites that surround St. François:

Trigger Hill
Location: 20 minutes by boat, North-East St. François
Depth: 8 - 18m
Trigger Hill consists of a sharply slanting hill with three main coral rivers that run from the seagrass beds at 7m to the sandy slopes located at 18m and beyond. The coral bommies here act as a cleaning station and many resident schools of fish can often be seen here, including large Napoleon Wrasse, Blue and Yellow Fusilier, Humpback, Bluelined and Bohar Snapper as well as the shimmering Bluefin Trevally. Species like Camouflage and White-blotched Grouper live deep within the crevices of the coral, while smaller specimens rest casually at the base of the coral allowing for a closer look. Divers will often see Garden Eels peering out from their burrows in the sand galleys along with Seychelles Anemonefish, Moray Eels and Yellowmargin and Titan Triggerfish. Golden Trevally, Green Jobfish, Whip Rays and Nurse Sharks venturing from the sandy slope is also a common sight.
Special Feature: This site is named after the Yellowmargin Triggerfish which build their nests and lay eggs here. They can often be seen undulating in the water column above as they fiercely protect their territory. Trigger Hill is a great site for general observation of fish behaviour. 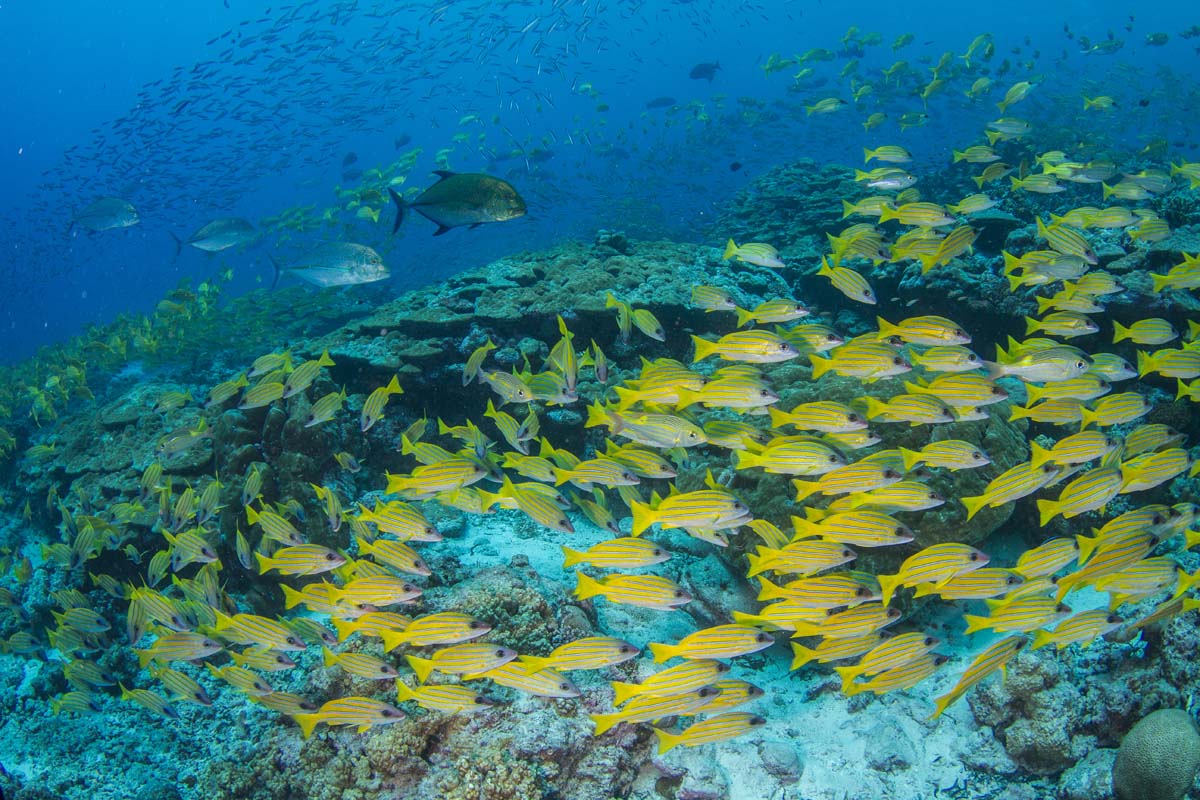 Three Sisters
Location: 20 minutes by boat, North St. François
Depth: 15 - 25m
This site, as the name would suggest, holds 3 large coral patches which lie on the flat sandy bottom at 20 meters. A variety of Grouper and Snapper species densely populates these ‘sisters’ and as such the dive starts by discovering and appreciating the abundance and diversity of fish here. Divers will also get to see Garden Eels and Yellowmargin Triggerfish on the surrounding sand where they make their respective burrows and large nests. The dive here is ended at a raised reef in the East which sits at about 13 meters. Here there is a colourful aquarium-like cleaning station where Yellowfin Goatfish, Onespot Emperor, Bluelined Snapper and Napoleon Wrasse congregate. Alternatively, guests can choose to start the dive on the outer wall which is covered in purple Sea Fans and extends to a sandy shelf at 30 meters. When gazing off the wall, there is a big chance of seeing big fish out in the open blue.
Special Feature: Three Sisters holds something for every kind of diver with its combination of calm patch reef, aquarium-like cleaning station and deep drop-off.

Rat Rays
Location: 25 minutes by boat, South-West St. François
Depth: 8 - 25m
Rat Rays is the name given to the channel entrance of St. François Atoll. This site is situated within the main tidal flow in and out of the large lagoon which makes it a highway for various fish moving between the lagoon and the open water. Outside of this channel, Spur and Groove Coral formations give way to ravines of white sand that cascade over the edge of the drop-off which surrounds the island. St. François and its curving beaches are home to a plethora of birds and the surrounding shimmering waters are a hotspot for Green Turtles, pink Whip Rays and Greater Barracuda. Large Napoleon Wrasse and Milkfish can often be spotted hovering in the blue edge of the drop-off.
Special Feature: A lot of action is created by an array of diverse species congregating around the mouth of the channel as the tides rise and fall. 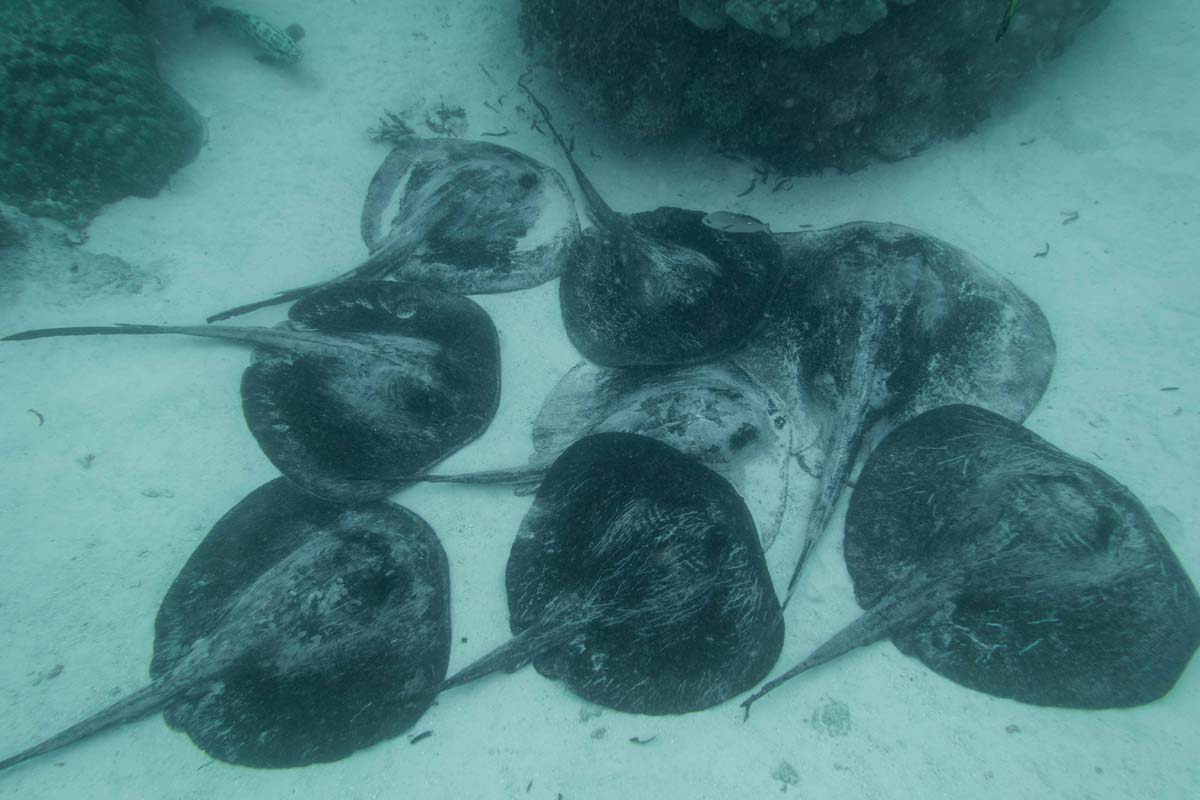 Mantam North
Location: 25 minutes by boat, West St. François
Depth: 7 - 20m
The coral assemblage at Mantam North with its flat gently sloping bottom resembles that of a patch reef. However, at 10 to 18 meters patches of sand are scarce due to incredibly high coral cover. Here the copious undulations of Hard Coral lead divers through a myriad of reef fish with occasional protrusions of large bommies which are thick with Bohar and Black Snapper as well as Fusilier. Divers will often spot Nurse Sharks here as they patrol the reef. Mantam North makes for a great training site with the depth limit at 18m where the coral finally meets the sand. The relaxed ambience at this site allows divers to get close to Giant Moray Eels and Lionfish that inhabit the deep crevices in the reef.
Currents at Mantam North: Currents are generally mild which makes it ideal for underwater photographers who like to document even the smallest of fish.
Special Feature: This is the best site for those who like to get up-close to the variety of reef fish for photography or behavioural observations due to lack of currents. 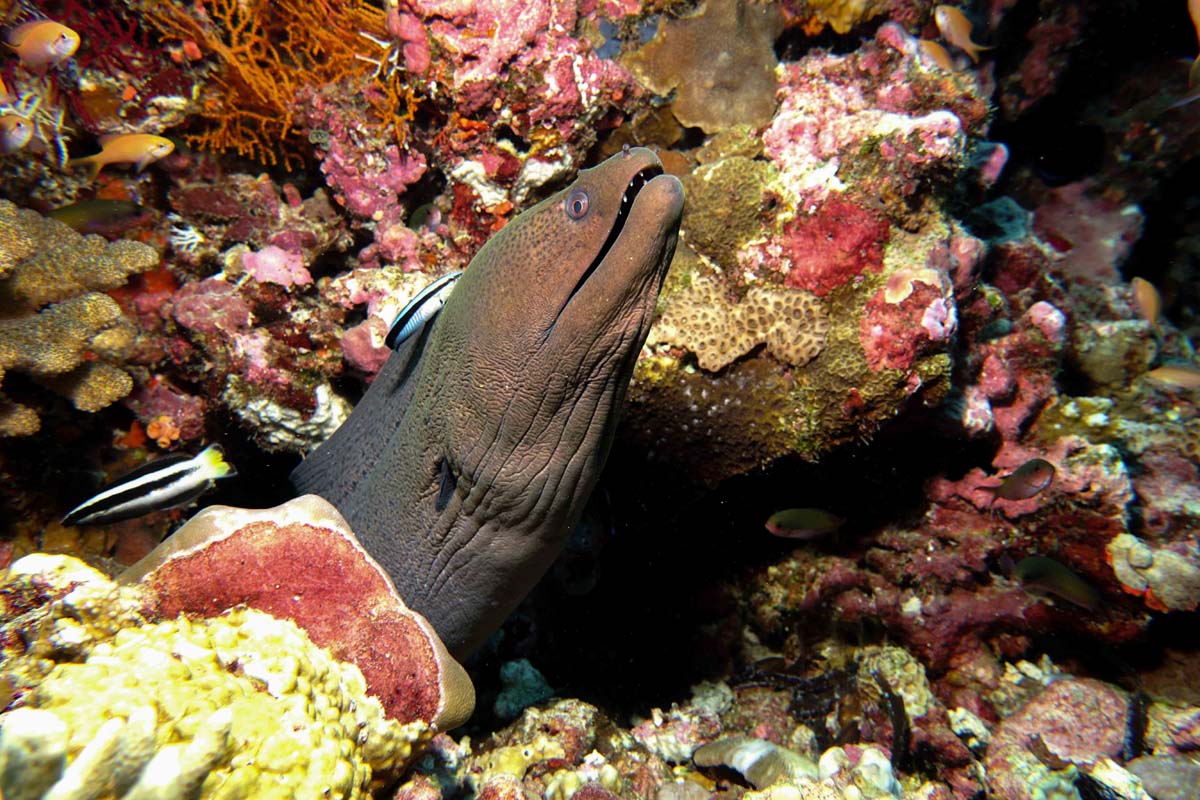 West End
Location: 30 minutes by boat, West St. François
Depth: 12 - 40m
West End holds a sloping reef which extends from 12 to 40 meters with most activity seen at 16 meters. Dense schools of Bluelined Snapper, Bluefin Trevally and Humpback Snapper are found around the reef and during low tide countless large Green Sea Turtles can be seen as they move from adjacent flats. The wall of the reef extends to a second plateau which is deeper than diving limits; it is here that a number of sharks reside and from where they follow the wall up to visit divers at the site. Large Grey Reef and Nurse Sharks are the most common at the site with the latter even more so in the shallows. Spur and Groove Coral formations stretch out towards the south with large aggregations of fish such as Bohar Snapper and Chub. Depending on the season, Manta Rays are most seen at this particular site, if not on the dive then feeding with Milkfish at the surface.
Special Feature: West End is close to the south of St. François where a number of Sharks and Rays are commonly seen. It also has the added benefit of beautiful coral and an abundance of fish to complement it. 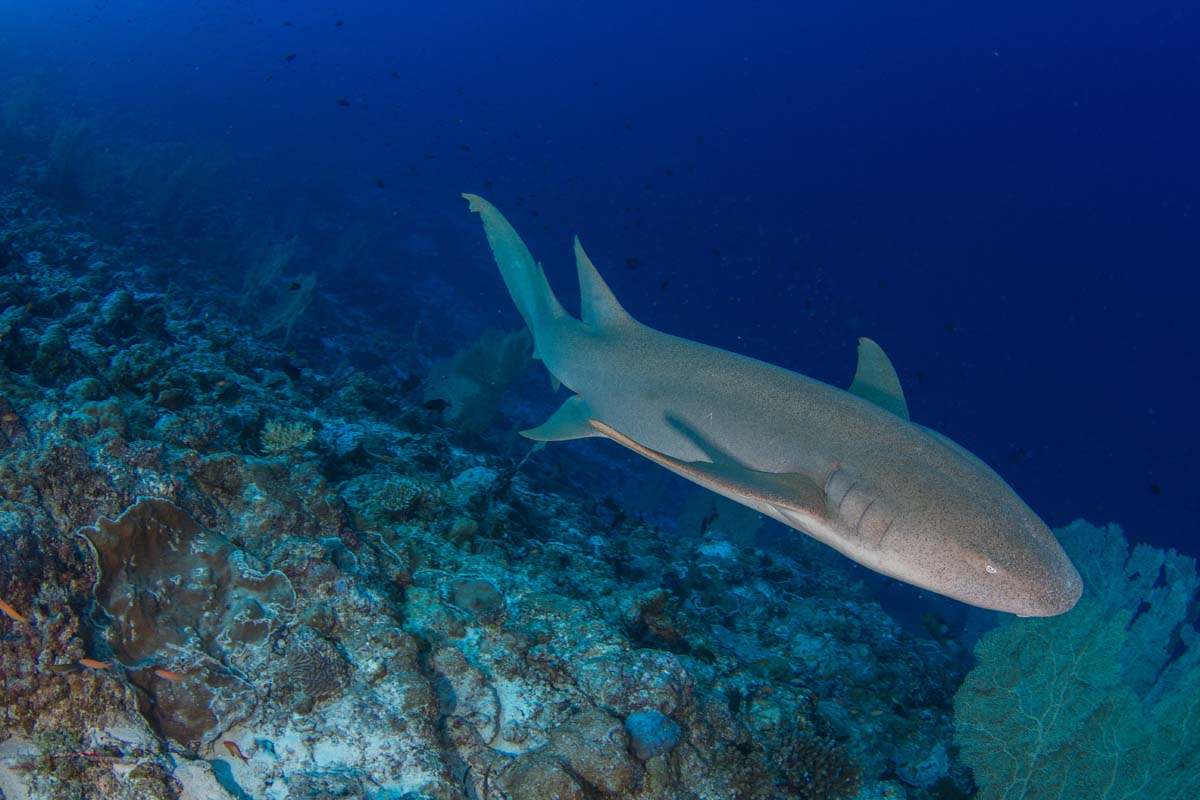 Swiss Garden
Location: 35 minutes by boat, South St. François
Depth: 12 - 20m
Swiss Garden is the farthest dive site at the southern reaches of St. François Atoll. The site is a well-known historic fishing ground for local individuals with many reports of thriving populations of big pelagics, yet this is a site rarely dived. This remote site is one for the explorers out there as you never know what you might see. The bottom is a flat, steadily sloping reef comprised of mainly Hard Coral. A flurry of marine life covers the coral ridges and bommies that are interspersed with the flat seabed. Dives here have offered up incredible sightings of Giant Trevally (GT), Dogtooth Tuna, Nurse and Bull Sharks, Whip and Manta Rays, huge Green Turtles and schooling Milkfish.
Special Feature: The site is only visited per request by those who wish to explore waters which few others have dived before. 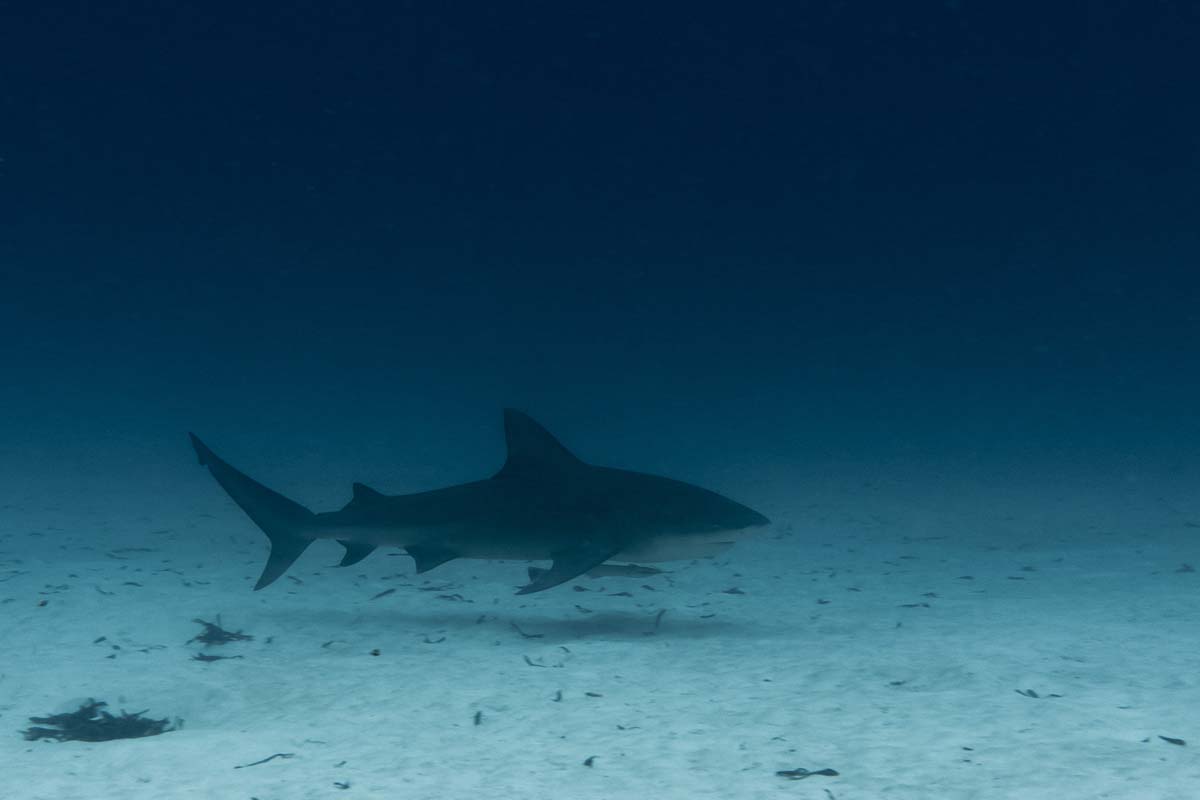 Wouldn’t you like to dive into a world of wonder with the Alphonse Diving Team? Book your scuba diving experience today!

Scuba diving in the Seychelles is an experience you will never forget.