The Seychelles is known for its unique and interesting species. Whether it be the colourful pelagic fish species like Bluefin Trevally or Wahoo, bizarre dotted species of Nudibranch or the Jellyfish Tree with its unusual seeds, these scattered islands in the Indian Ocean hold a world of peculiarities. One such crazy creature is the Coconut Crab. 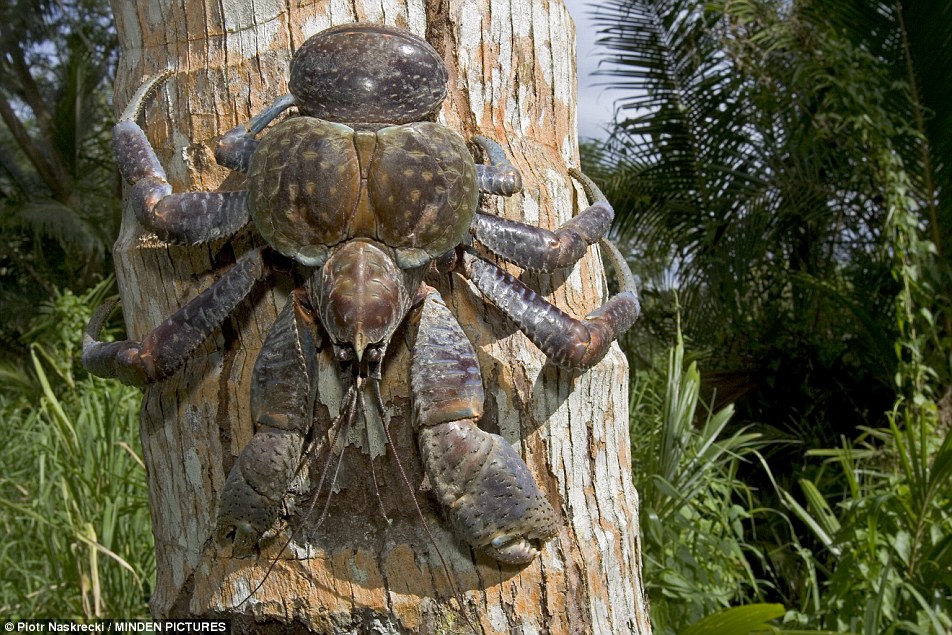 The Coconut Crab (Birgus latro), the only species of the genus Birgus, is a terrestrial hermit crab. Also known as the Robber Crab or Palm Thief, it is the largest land-dwelling anthropod in the world and can weigh up to 4.1kg. These monstrous crabs can grow up to 1m in length (from leg to leg) and like other decapods have 10 legs and a large abdomen. The front-most pair have large claws (the left is larger than the right) while the last and smallest pair of legs is used for tending to eggs by the females and for mating by the males. Sexual maturity for Coconut Crabs are reached at around 5 years and they have been noted to have a lifespan of between 30 to 60 years.
Found on islands throughout the Indian and parts of the Pacific Oceans, the Coconut Crab is also known as Unga or Kaveu in the Cook Islands and called Ayuyu in the Mariana Islands. They are also sometimes associated with Taotaomo’na, a traditional belief in the Mariana Islands that ancestral spirits can return in the form of animals, like the Coconut Crab, to haunt the mountains and wild places of the islands. 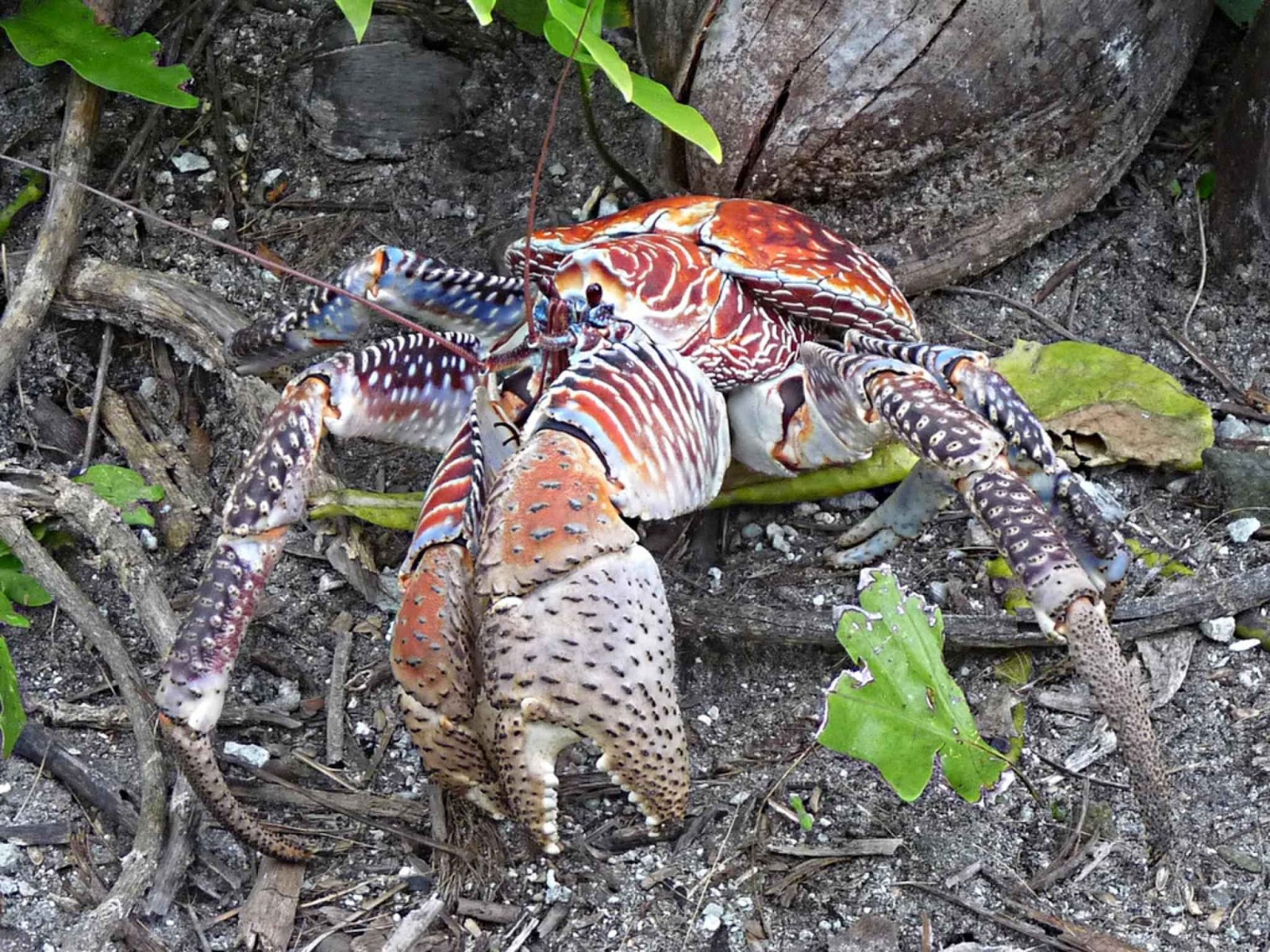 Coconut Crabs are solitary animals that live in underground burrows lined with fibres from coconut husks. They mostly feed on fruit, carrion, the shells of other crabs (to ingest calcium) and, despite what their name might suggest, on rare occasion they will pry open coconuts by removing the outer fibres with their strong claws. They are known for climbing Coconut and Pandanus Trees to escape predation from large seabirds and other older crabs. These crustaceans prefer to keep to themselves and have been known to fiercely protect their territories which is also why they are rarely found on islands with a high human population. 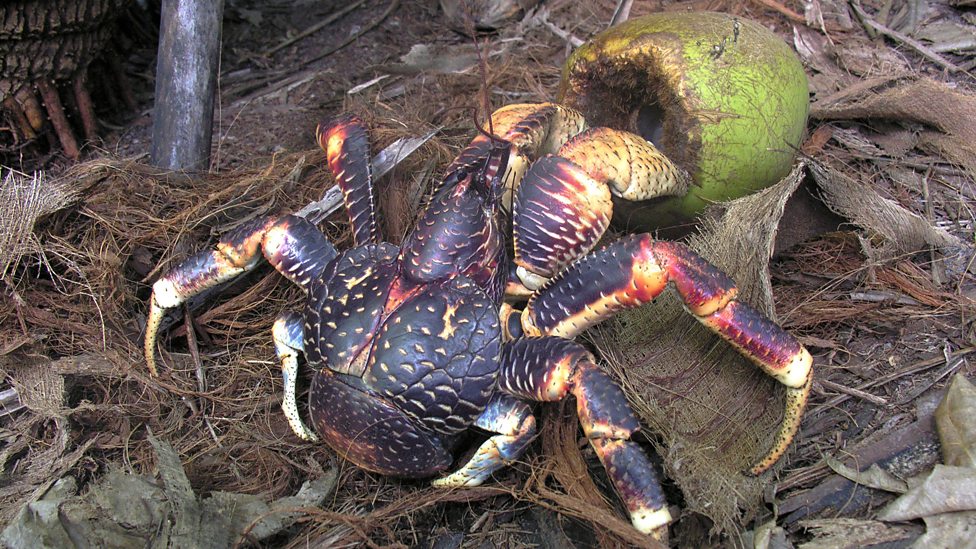 The colour of the Coconut Crab can vary from orangish-red to purplish-blue, but they are not hard to identify due to their enormous size. Even though these curious creatures form part of the Hermit Crab family, they have a somewhat more complicated relationship with the ocean than their cousins. Spending the majority of their lives on land, the Coconut Crab also mates on land; this will occur quickly and frequently from May until September. The process is somewhat still unclear as the males have spermatophores and it is believed that the males will deposit of mass of spermatophores on the females’ abdomen and as the eggs pass through the mass, they are fertilised. After this process is completed, the female will lay her eggs in crevices or a shallow burrow and then attach the eggs to her abdomen which she will then carry around for a few months. Once the eggs are ready to hatch, the female will release her eggs into the ocean where the larvae will remain for 3 - 4 weeks in the first of roughly 5 zoea stages. Floating within the pelagic zone, many of the larvae will be predated upon, however, the small critters often use the shelter of floating leaves and branches to protect them. Floating coconuts have also been noted to be imperative to their survival and dispersion. With her larvae safely deposited into the ocean, the female retreats from the coast and will slowly but surely feed on the egg cases for the weeks to follow. 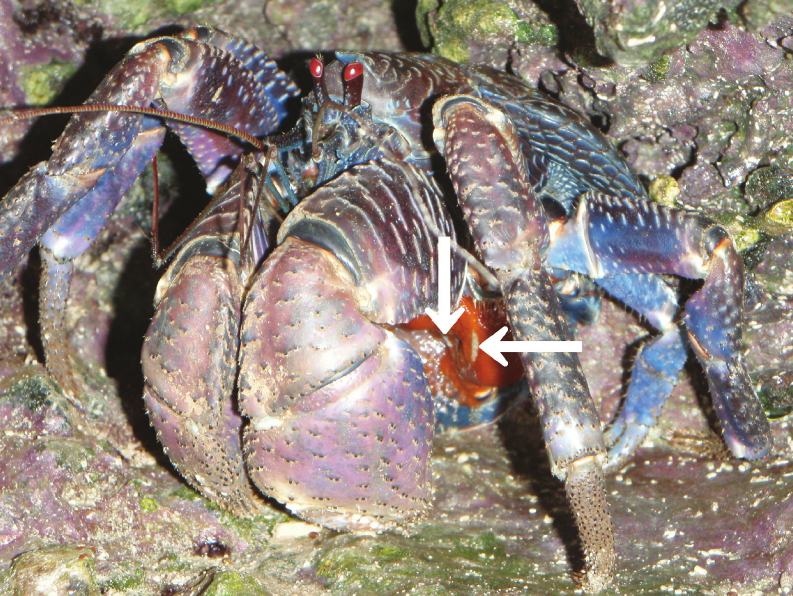 Taking around 25 - 33 days, the larvae will eventually moult into the post-larval stage at which time they will settle on the bottom of the ocean and find a gastropod shell and return to land. Similar to Hermit Crabs, juvenile Coconut Crabs will change their shells as they mature and will eventually develop a tough exoskeleton. These hard exoskeletons protect the Crabs and minimises water loss, they do however need to be moulted annually. During this period they will dig a burrow of up to 1m deep and hide away for protection for anywhere from 3 to 16 weeks depending on their size. It takes up to 3 weeks for the new exoskeleton to fully harden, thus they will stay hidden until they are protected again.
Once they leave the ocean, they lose their ability to breathe underwater and will drown if immersed in water for too long. This particular species has unique organs known as ‘branchiostegal lungs’ to help them breathe. Noted as one of the Crab’s most significant adaptations, the organs can be explained as the development stage between lungs and gills. The “lungs” consist of a tissue that is similar to that of gills, but it absorbs oxygen from air instead of water. Located in the cephalothorax, the organs need moisture to function, thus the Crabs will use their hindmost, smallest pair of legs to wet as well as clean the organs. They also have a set of rudimentary gills which can be compared to those found in species from the Paguridae and Diogenidae families, but noticeably smaller and with less surface area. The Coconut Crab also has a very keen sense of smell which helps it locate food.
The Coconut Crab is quite the interesting character and definitely not one to be messed with. Their large claws have incredible power, up to 750lbs of force exhibited in a single pinch. They have also been noted to feed on tortoise hatchlings, cats and dead animals. During a tagging experiment, one was observed killing and eating a Polynesian Rat. There is also a theory that Coconut Crabs are responsible for the disappearance of the remains of Amelia Earhart, who might have crashed onto the remote atoll of Nikumaroro in the Pacific instead of crashing into the ocean. This theory is fueled by a section of a skeleton that was found on the island in 1940 which matches her description. The rest is believed to be hoarded away in the underground burrows of the creatures. 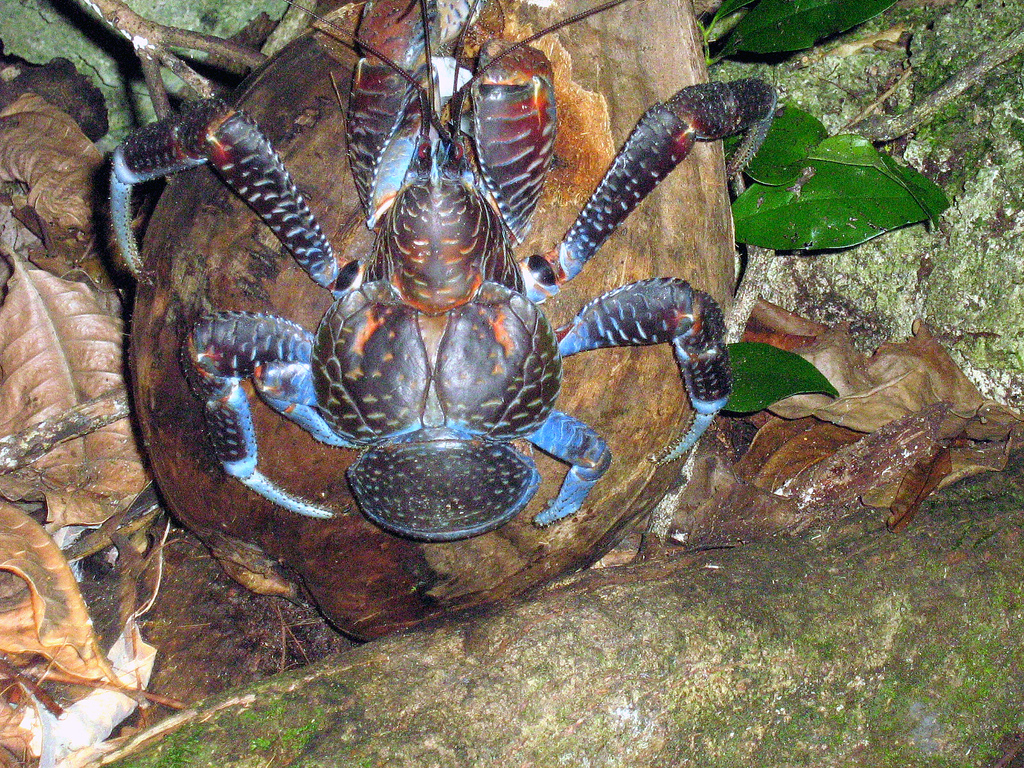 Now admired and monitored, the Coconut Crab was once listed as Vulnerable on the IUCN Red List due to being excessively hunted for their flesh. Considered a delicacy and aphrodisiac by Southeast Asians and Pacific Islanders, the extensive hunting of the species threatens their survival. Today, the species flourishes on islands with little human interference and the largest population of Coconut Crabs can be found on Christmas Island in the Indian Ocean. There is some evidence that suggests that they were once found on Madagascar, Australia and Mauritius. It is believed that the larvae must have been transported to these shores and a population developed from that as the species cannot swim. 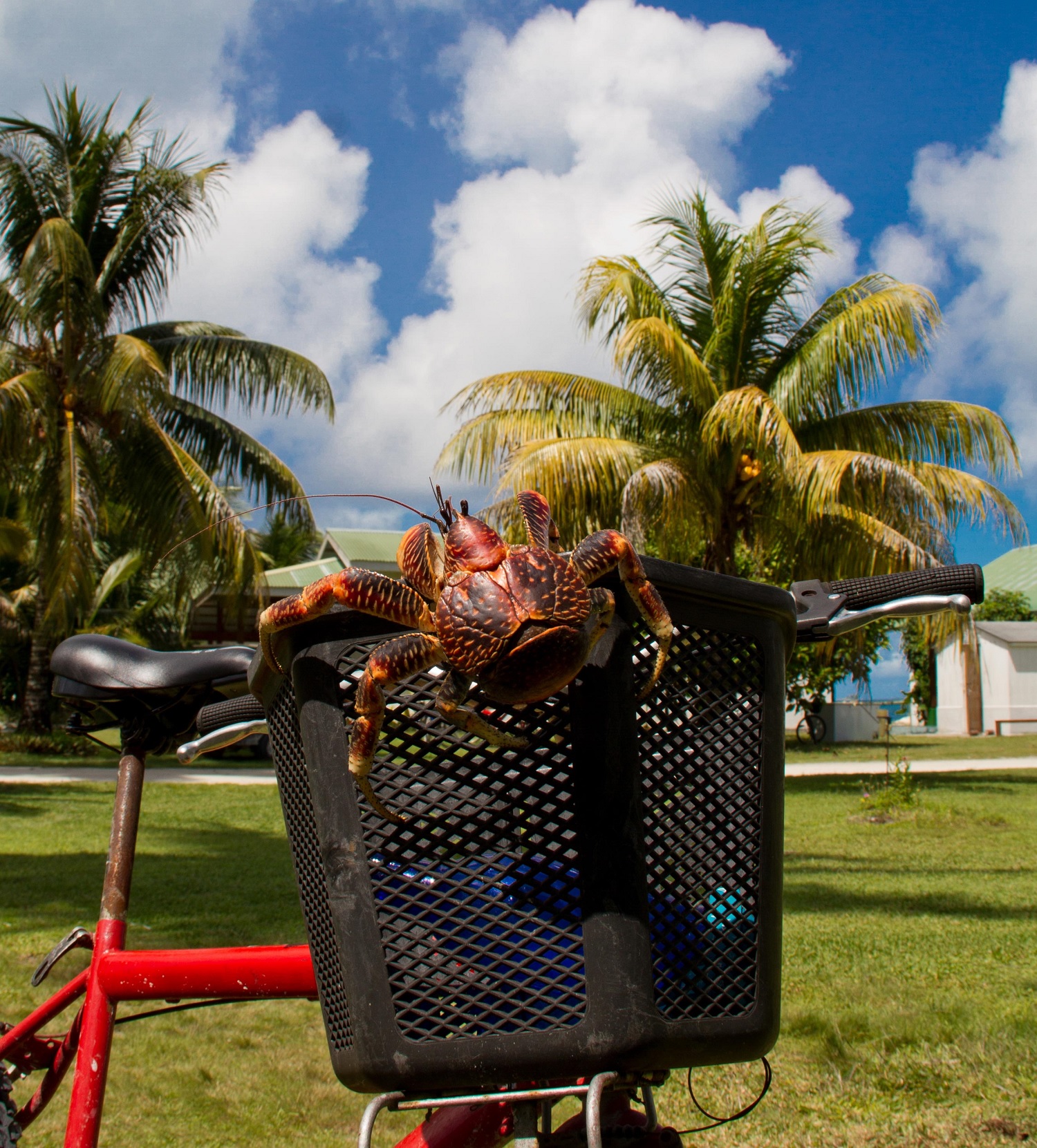 The Coconut Crab is one of nature’s curious creations and there is still much to be learned of and from these creatures. When visiting Alphonse Island, you might just be able to learn a thing or two. These crafty crustaceans have also been spotted on St. François during ICS Guided Walks and monitoring expeditions. So why not head out with our knowledgeable ICS Team and get the chance to view these hulking Hermit Crabs in their natural environment.